Azrik is a Third generation chaos titan born the child of Tzeneech, and Myspeth and was a Minor God of the Fade until his fall to Chaos.

During the centuries following the departure of the Old Ones, the Fade and its powers were controlled effectively by Tzeneech. Tzeneech busied himself during this time with the creation of his great project in the Arakhora, who he hoped would one day assist him in protecting and controlling the Fade. The Arakhora took all of his energy to create and a part of Tzeneech, the part that wished to do good things was captivated by the innocence of creating something in this manner. It was during his time creating the Arakhora that the Fade was the most potent, safe, and strong. There was a distinctly corupting moment during the creation of the Arakhora that for those paying attention they would have noticed the fall. During his time at the end of the creation he made a subsect of the Arakhora that was unafected by age, and most diseases. While he argued that he simply created this sub group in order to help control the Arakhora it could be argued that this was his first step on the road to his fall. 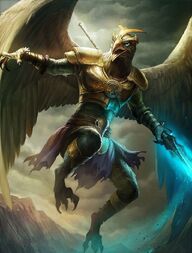 Tzeneech - Father
Add a photo to this gallery

Tzeneech - Family
Add a photo to this gallery
Retrieved from "https://lucerne.fandom.com/wiki/Amon%27Chakai?oldid=74451"
Community content is available under CC-BY-SA unless otherwise noted.