Armory Justman is the son of two members of House Justman, and thus is the current Patriarch and Lord of House Justman. Armory Justman would marry Zella Justman when he was fourteen, and she was twenty, and following her first pregnency she became very sickly and eventually she died of sickness. With Zella Justman he has three children in the form of Alethia, Glendon, and Maeri Justman of which Glendon is the heir of House Justman and in this positon is beloved by all he has met, his daughter Alethia is talented lady of whom is living in Lorderon while her bethrothed comes of age, and his final daughter Maeri is his most beloved person and Maeri has the bastard child of Arwood Lancer and the two have been in a long term romance.

Ironborn Invasion of the Riverlands

“The Ironborn came out of nowhere. It had been so long since we had been actually assaulted that we had grown soft. That softness got a lot of people killed.”
— Orrys Lancer

Following the rise of Euron Greyjoy the Ironborn begin reaving the western lands again as Euron was attempting to sow chaos amongst the Lucernian allies and try to stop the flow of reinforcements into Bolten. Seeing the Riverlands as the great reserve yet untapped by the Kingdom of Lucerne Euron would send two large Reaving fleets to the Riverlands of which one was meant to feign an attack on Pinkmaiden, while the second and much larger fleet would reave the lands of House Justman, and House Lancer of whom were on the island of Rigen. On the island of Rigen the forces of House Lancer, and House Justman were the supreme powers of the island and both of them had spent generations not remembering the threat that the Ironborn poised to them, and thus their fleets remained anchored, and their military forces were lax in much of their preperation. In this state the Ironborn would move under the command of Stygg Tawney of whom led some two hundred ships against the port of Weldenvale, while his second in command Tom Tidewood would lead sixty ships against Castle Lancer, and the lands surrounding the castle. The plan was for Tom Tidewood to move south and attack the richer Lancer lands, while Stygg Tawney waited nearly three days before making his presence known, and then once he had he would delay any relief from the Justman's and thus allow Tom to escape with all the loot he could.

“They were greenlanders and that immediatly made me think poorly of them. Pathetic Greenlanders thought there walls would protect them, and we would show them how wrong that feeling was.”
— Stygg Tawney

Stygg Tawney had brought some sixty of his ships as large Cogs, as they were planning to haul away a lot of goods, and materials from the island of Rigen. The mines of Lancer were one of the first places that Tom Tidewood would plan to hit, and Tom knew that the Lancer's had a relatively weakly defended holdfast near the mines that defended them, but he knew that he would be able to take it quite easily. Moving to land near Castle Lancer, he moved ashore with half his force, while the other half moved around the island to the site of the mines of Lancer where they would rush the small holdfast of Sturren Hold, and then from there take as much loot from the mines as they could. Tom Tidewood would quickly move ashore and lying before Sturren Hold the Ironborn would sack the town of Sturrenia of which they hung hundreds of bodies in the town square and looted everything they could get their hands on. Amongst the dead was the heir to House Stur in Wallen Stur of whom had attempted to bargain his son Gorold Stur back from the Ironborn who had taken him, but was instead murdered and hung before the Keep of which was one of the few places that didn't fall. Emly Stur (Emly Lancer) and her daughter Bethany Stur would be taken hostage alongside several other high nobles as the Ironborn sent these slaves back to the boats while they moved to attack Sturren Hold.

“They had taken things from us that they had no place to take. Who will give me back my son I say. Who will avenge his death if not me.”
— Orrys Lancer

Following the sack of Sturrenia the Ironborn would assault Sturren Hold of which had also not been alerted to the danger and was taken completely unaware. Fighting at the Hold would be bloody, and the defenders were able to close the gate briefly before it was retaken again, and the Ironborn flooded inside killing every man inside the Hold including the heir to House Lancer in the form of Arnell Lancer, and following his murder his wife Leven would become enraged and killed two Ironborn before she was shot through with a crossbow bolt. With the hold taken the Ironborn would ransack everything of value including using hundreds of prisoners to push carts of minerals to the cogs offshore, and taking hundreds of slaves from around the Hold. At this point Castle Lancer came under assault, but by complete luck the gaurds on the main gatehouse were able to close the gate, and set off the alarm, and following this the battle devolved into a siege of which the Ironborn could no win, as they didn't have the required tools to take the castle. After two days of the seige it became clear that the Ironborn couldn't assailt them, and thus realizing that the Ironborn were simply delaying them, Arwood Lancer would lead a force of some three hundred cavalry out of the castle and move around the rear of the Ironborn forces, and seeing this the Ironborn pulled back and were harrassed for hours as they retreated back to the boats. Arwood would stop the chase as he regrouped with some three hundred men at arms from the region who had arrived outside of Sturrenia where they entered the town to find much of it burned to the ground, and hundreds dead. Arwood would find his sister's husband and child hung outside of the main keep, and from survivors he learned that his sister and her one daughter had been taken captive by the Ironborn and had escaped by the boats with the rest of them.

“They saw me and thought the main attack was there, but I was the diversion, and they were too stupid to see that.”
— Stygg Tawney

With the attack on the Lancer lands underway the second and smaller force led by the overall leader Stygg Tawney would move the fleet outside of Weldenvale in order to alert the Justman forces they were there. Having heard of the attack on the Lancers from ravens they had been preparing to assist the Lancers, but seeing the Ironborn fleet and watching several Longships moving into the rivers they would end that plan, and instead prepare to attack the Ironborn fleet. Armory Justman would lead the Weldenvale Fleet that was some forty ships strong so was weaker then the Ironborn, but the Ironborn were less capable of fighting fleet actions, and thus the Weldenvale fleet spent two days attempting to draw them into battle, but the Ironborn continued to flee, and then on the third day they recieved word of the extent of the reaving in the south, and the fact that the Ironborn there had been able to escape, thus realizing reinforcements were coming the Weldenvale fleet returned to port and went into defensive action. Believing the assault would happen the next day the entire garrison was under high alert, but two days passed and nothing happened, and it was only when they received a raven from Lorderon saying the Ironborn had slipped through the Lorderon Pass that they realized they had been tricked the entire time. 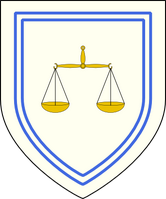 Zella Justman - Mother
Add a photo to this gallery

Retrieved from "https://lucerne.fandom.com/wiki/Amory_Justman?oldid=43388"
Community content is available under CC-BY-SA unless otherwise noted.