The Arakhora are an ancient race of bird-like humanoids native to the forests of Croatia, within Europe. The Arakhora have built themselves from a once beaten and enslaved race to perhaps the premier power in Croatia in the Kandor Empire, all through the determination of a self evolved sect within their race.

The Arakhora are fast breeding, and this is one of the main reasons they have so dramatically grown in the time following the defeat of the Empire of Serbia. As one of the oldest races in existence they were originally designed by the Chaos God Tzeneech before he had fallen from the Noble Titans to the service of madness.

The Arakhora race is split into four main branches of its race, and while each of them is different the overall Arakhora race is still one but has different branches much in the way of ethnicities for the human race. The first are the Attrakhora and they are by far the most numerous, and they form the soldiers, tradesmen, and laborors of the Arakhora race, and the Empire of Kandor. The second are Tevinkora and they are the warriors of the Arakhoara and this is seen by the fact that they have far more feathers of which the added feathers are hardier, and provide physical defences, while the Tevinkora are also usually atleast a foot or more taller then all the other Arakhora outside of the Selinkhora. The third are the Selinkhora and they are very similar to the Mennetrikhora in that they are extremely long lived to the point of near immortality, but they differ in that they are the only flight capable Arakhora, and are also two feet taller then the rest of the Arakhora, and a foot taller then the average Tevinkhora. The final Caste is the Mennetrikhora and these are distinct in that they are immortal in their ability to age, and also they appear extremely frail when not consealed by their massive amount of feathers of which they have evolved into using in order to protect their extremely weak phsysical nature. Alongside this ethnic breakdown exists two other branches of the Arakhora in the form of the Winged Kintiri, and the Wingless Kintiri of which are led respectively by the progeninators Anzu, and Rukhmar.

The Arakhora are one of the earliest races on the planet with only the Lizardmen able to reasonably say they are more ancient then them. The Arakhora were created by the Titan Tzeneech in the long term hope that they would be his servents in the task of protecting and controlling the Fade.

When Tzeneech fell to Chaos, many of the Arakhora were released from the fade, and came to exist on the planet Earth.

Long before the Arakhora were made into slaves by the humans they were a might Empire that controlled basically all of eastern modern day Croatia. They became embroiled into the eternity war with the Woses, Trolloc, and Murloc and were left destroyed and weak following their defeat.

“You heard about it in passing in first. Some bird men attacking the Dark Lord, and burning Orcs by their thousands in battle. It wasn't until you saw the White branches, and olive covered trees that you actually realized these birds were a serious threat.”
— Anora Theirin

With the rise of the Talon King Makir there also came a massive discovery for the Arrakhora in the form of the discovery of the Dis of Apexis of which was said to have been writen by Terrok himself, and detailed the excistence of the devil of their religion more, and the details pointed nearly directly at Sauron being the Devil of their beliefs. WIth this discovery the Darkweavers pushed with all of their influence to attack Mordor, and this happened with the sacking of the Kingdom of Grisnet of which was an evil vassal kingdom of Mordor sitting on the border of Kandor. The Arakhora would at first make offers of peace with the Kingdom of Grisnet, but when during these initial meetings the Darkweaver Parshah Lithic would notice large sigils, and monuments dedicated to the Dark Lord Sauron, and seeing this as a travisty he returned to Kandor and told them of the evil in Grisnet, and during the next meeting they ambushed and killed hundreds of Grisnet men in a massive ambush before sacking the second largest town in the Kingdom of Grisnet. Seeing this happen the army of Grisnet massed, and called for aid but by this point the Arakhora were all over their lands and in a short siege the capital of the Kingdom of Grisnet was sacked too with anyone who didn't surrender being put to the sword.

“My sweet daughter when you were nothing but a little girl we had the first of the Bird attacks on our lands. It wasn't our lands I suppose but I still remember the fear that ran up my spine when I heard the stories of the entire Kingdom of Toran put to the torch and their crazed trees growing up around the ruins.”
— Loghair Theirin

Following the destruction of the Kingdom of Gristnet the nearbye Kingdom of Glortindale would come under massive assault, and the vast plains of Glortindale were easy pickings for the vengeful Arakhora of whom took control of the land, but this time under the guidence of Skraa Skettis most of the humans of Glortindale were sent eastward away from the Dark Eye of Sauron where they were settled in the plains of Croatia. With the destruction of Glortindale they begin the heavy planting of the Olemba Tree, and spreading the forest westward which they did with great speed over the next months following their assault on Glortindale. West of Glortindale was the massive Kingdom of Toran of which was heavily fortified, and was reinforced by a large Orc force which was the first time a large Orc force was seen by the Arakhora and proved to the Kandor goverment of the evil of Mordor. Krisnee Sethekk would lead the Arrakhora forces as they besieged the massive city of Toran which had some thirty thousand people living in it, and it was at this point that the entire Toran army moved into defensive position while the Orcs massed north of the city in preperation to attack the Arakhora. While the siege continued the Arakhora unleashed their secret weapon in the form of the Vehk Skettis's Kaliri. His Kaliri blotted out the sky its said, and in their massive numbers they overwhelmed the Orcs and allowed the large Arakhora army to massacre them in their thousands before the Kaliri assaulted the city of Toran itself , while the Arakhora army surrounded the city from all sides and bashed their way inside. As the city fell the fabled High Commander of Toran would lead a defence around the palace and it was here where Krisnee Sethekk would give him battle. After fighting for some time he personally slew the High Commander of the Toran Gaurd and burned the Mordor flag standing above the Toran palace grounds, thus sealing the fate of the Kingdom of Toran.

Following this Krisnee was forced on the defensive as the Empire of Mordor launched a massive counter assault against the growing segement of the Terrakar Forest which was now covering the old Kingdom of Toran, and during the fighting he fought against the Nazgul Ren the Unclean of whom he defeated in the fight and banished the spirit back to Mordor.

They have brightly feathered bodies in a veritable rainbow of colors, hooked beaks, clawed hands, taloned feet, and an erectile crest of feathers on their heads. They wear ragged cloaks about their bodies. Arakhora appear to also have "sage" (with ornate shoulder and head ornaments) and "warrior" (with a metal helm and mail epaulets) classes.

Arakhora breed a species of owl called "Kaliri", these owl like creatures have two heads of which is serviced by only one brain lobe, so their is only one contious mind going on inside it.

These Kaliri are created as a sort of shock troop for the Arakhora, and are so quickly breedable that in battle a force of Arakhora may unleash thousands of Kaliri at their enemies, and while the enemy deals with the Kaliri they are able to advance unstopped. 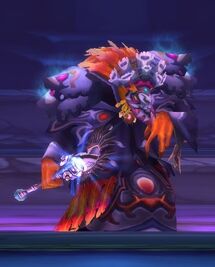 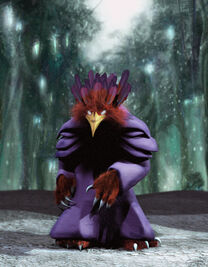 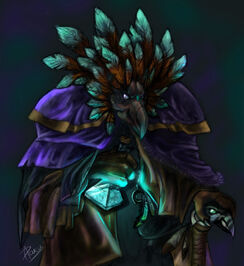 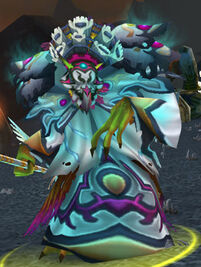 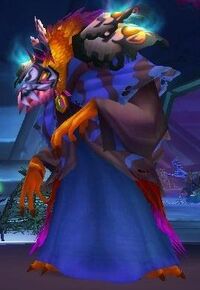 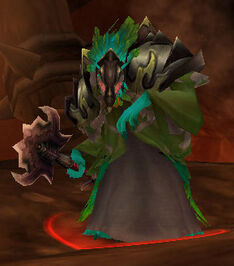 Raven Lord Vekh
Add a photo to this gallery

Most Arakhora worship the living Arakhora god Terokk. This influence holds true of basically 90% of the Arakhora population although a growing number are turning to Anzu and his beliefs. Underneath the worship of Terokk there stands a Pantheon of other Arakhora Gods which depending on the Arakhora Sect some of these gods may gain or lose importance due to the particular sects view of ancient texts, or some other changing. This Pantheon is formed from the Titan Gods that first created the Arakhora people, and while there importance has diminished over time they are all still remembered for their role in creating the Arakhora.

Terokk is the religion worshipped by nearly the entire Arakhora race, and is of the most importance to Kandor. He is one the two living gods of the Arakhora and has a rivalry with the other living god Anzu.

Terokk is the god of the arakkoa. Isfar says Terokk was the arakkoa's greatest hero who built Skettis with his bare claws, then one day disappeared, and may have been the god Rukhmar. He has his "eyes" set at Veil Shienor and Veil Reskk, so he can watch over these colonies from Skettis and a Darkstone at Veil Skith.

He has also done acts perceived as evil by a group of arakkoa renegades led by Kirrik the Awakened and his apprentice, Rilak the Redeemed, who see Terokk as a false prophet who will lead their people to their doom. These evil doings include raising the spirits of the defenders of Veil Rhaze (destroyed by the explosion that all but obliterated Auchindoun and created the Bone Wastes) as well as setting his minions to corrupt avian hatchlings at Veil Lithic, and coordinating with his forward sages at Veil Shalas, where they wage war against the Light.

"From the darkest night shall rise again the raven, shall take flight in the shadows, shall reveal the nature of its kind. Prepare yourself for its coming, for the faithful shall be elevated to take flight with the raven, the rest be forgotten to walk upon the ground, clipped wings and shame. {C}Steel your minds and guard your thoughts. The dark wings will cloud and consume the minds of the weak, a flock of thralls whose feet may never leave the ground. {C}The old blood will flow once again with the coming of the raven, the return of the darkness in the skies. Scarlet night, and the rise of the old. {C}The raven was struck down once for flying too high, unready. The eons have prepared the Dark Watcher for its ascent, to draw the dark cloak across the horizon."

-The Holy Rapture of Anzu

Anzu is a god worshipped by a small but increasingly growing number of Arakhora . Anzu is one of the two living gods of the Arakhora, and for this reason Anzu battles Terokk for control of the soul of the Arakhora.

Retrieved from "https://lucerne.fandom.com/wiki/Arakhora?oldid=59952"
Community content is available under CC-BY-SA unless otherwise noted.