Broderik Snow would begin his movement into crime as he found his means of rising to what he thought was his birthright as the son of Robert Baratheon and in this way he would begin to use his natural charisma to bring several prisoners and criminals within Tarndale and using these criminals he started his own criminal group known as the Twelve of Tarndale. Trevor Baratheon accompanied by several of his brothers and his heavily pregnant wife Adelinde would lead a force of several thousand to Brill to take part in the siege of the city and are there when they break past the defences and the city is retaken from the forces of House Jestife.

Lisbeth Tarly would become involved romantically with Robert Baratheon of whom seduced her and she fell quickly in love with him despite the reputation that had already begun for him. Following her pregnancy with their child it was Robert that begin to withdraw from their affair beggining new relationships and while Lisbeth was devestated by this she found solice in the protection her brother Randyll offered her and as she grew closer to her brother during the pregnancy the start of the Tarly-Baratheon hatred begin.

The Bastards of Robert Baratheon 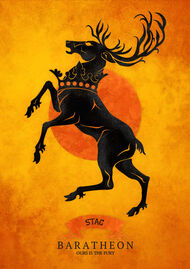 Robert Baratheon - Father
Add a photo to this gallery

Robert Baratheon - Father
Add a photo to this gallery
Retrieved from "https://lucerne.fandom.com/wiki/Broderik_Snow?oldid=66915"
Community content is available under CC-BY-SA unless otherwise noted.