Croatia is the very large region to the East of Italy, and incorperating nearly the entire eastern half of Europe. The World Edge Mountains runs through the eastern half of Croatia. There is debate amongst those inhabiting the regions of Ukraine, Greece, Umbar, and Belarus whether they are a part of Croatia and because of this they are red on the map.

Croatia is dominated by three major groups in the forces of Mordor and their allies in the northwest, the forces of Kandor in the center, and the forces of the humans in the south and east of the regions. The Humans of the south and east are the most numerous but are devided between three major Kingdoms, and a huge amount are in small little kingdoms, and dutchies. Their is also an encroaching and ever increasing amount of Rus entering the region in the lands of Ukraine, and this threatens to change the foundation of Croatia as the region would become dramatically different. 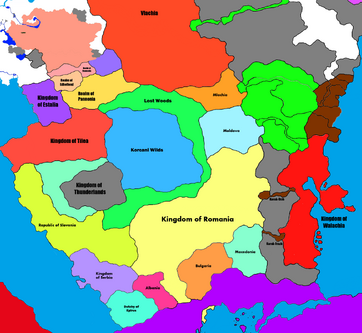 Croatia Political
Add a photo to this gallery

The Lands of Croatia are distinctly different depending on the region that you are located in. The lands of the east are vast plainslands which are interupted by the largest mountain range in Europe in the form of the World Edge Mountains. The western lands are a fertile land of which green pastures are the routine sites, and this is only broken by the darkness of the eastern range of the Mordor Mountains, and the darkness of much of southern Harad. The lands of the south are a hot land where the Empire of Byzantine has extended their culture throughout.

Retrieved from "https://lucerne.fandom.com/wiki/Croatia?oldid=76132"
Community content is available under CC-BY-SA unless otherwise noted.