Lucerne Wiki
Register
Don't have an account?
Sign In
Advertisement
in: Titan, People, People of Lucerne,
and 3 more

Gernimach is a sixth generation Titan created at the Emerald Arch.

Gernimach would be created during the Age of the Man Gods as he described being created just shortly before the Second Titan Civil War. Gernimach would be the one that possessed Witold Jestife when he and Kieth Schwartz attempted to enter the Fade and free James from the Titan Vhloraz, and then when Witold was brought back to reality it was Gernimach that retained this possession. Gernimach would gain complete control over the body as the torture done to Witold inside the Fade had left him broken and without the magi abilities of James to protect him at all he would become unable to cope with the mental anguish and would make a deal with Gernimach and this deal all but killed Witold but saved him from having to feel the pain of what had happened to him instead placing him in a sort of coma. Gernimach and Vhloraz would at first work together but as Vhloraz gained more influence over James it was Gernimach that betrayed Vhloraz and worked with Kieth Schwartz to form a pact for James to make with Vhloraz which would give James safeguards to stop Vhloraz from ever taking full control. After betraying Vhloraz and leaving him unable to fully gain control of James it was Gernimach that feigned continued loyalty to Vhloraz who was far more powerful then he was but in actuality he begin forming the Order of the Cerulean Eye in order to eventually take control of the Valley of Lucerne and kill his now rival Vhloraz. Gernimach would begin the exploration of the Tower of Brelloht where as with many of the Towers of Lucerne he believed he could gain access to the power he needed to complete his plans. Gernimach would send Wuldrik Toyne to access the Tower of Bheltuhl, and following Wuldrik's success in doing this it was Gernimach that rewarded Wuldrik by promoting him to what was quickly becoming a plot to create and alliance with the Senegal in Loudlon.

Gernimach would be created during the Age of the Man Gods as he described being created just shortly before the Second Titan Civil War. 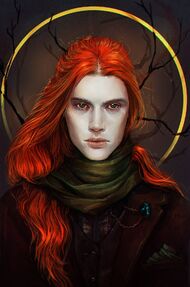