Fighting in the Orcish Invasion of Africanas they would be forced to deal with immense defeats by the Romans early in the conflict and then fought during the Battle of Carthage where after two battles trying to defeat the Orcs attacking them the Orcs just kept coming eventually forcing the retreat by sea of the Roman forces in Carthage. Fighting during the Orcish Invasion of Hispania they would defend the region of Valencia where they remained for most of the conflict but following the collapse of the Bretonian defences around Andorra the Romans would retreat either by sea or by land out of Hispania leaving behind Hispania to become dominanted by the Orcs. 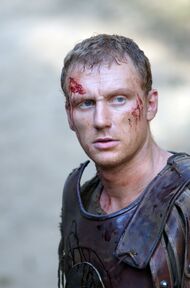 Lucius Vorenus - Friend
Add a photo to this gallery
Retrieved from "https://lucerne.fandom.com/wiki/Gnaes_Batatius?oldid=67650"
Community content is available under CC-BY-SA unless otherwise noted.