Godfrey Crester is the son of Gregor, and Sarha Crester making him a member of House Crester.

As the Bronheim Rebellion threatened to reach a point where true fighting would take place it was James Lovie II. who would send his loyal Circle of Magi members Lothar Guntbold, and Godfrey Crester to the city of Bronheim where they were to meet with Lord Dustin Bardwyn and give him a letter written by James. Lothar, and Godfrey following their work in ending the Bronheim Rebellion move southward and acting on the orders of James Lovie II. would go to Castra Madrisimo where they would target the main Righel fleet there for sabatage and while this was not at first noticed it would come up in a major way at the Battle of Madrisimo. 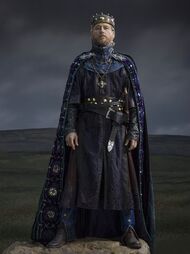 James Lovie II. - Master
Add a photo to this gallery
Retrieved from "https://lucerne.fandom.com/wiki/Godfrey_Crester?oldid=78852"
Community content is available under CC-BY-SA unless otherwise noted.