Start a Wiki
Hodir is the youngest son of the Titan Odin, and his half Titan wife Freyja. Hodir has one child in the form of Grom'Thar of whome is the face of the Magnataur and their King for all intensive purposes since Hodir disappeared into the mountains, or in actuality was destroyed by his brother Gymer.

Hodir travelled east during his youth on the orders of his father, and with him he took a portion of Visigoths with him and they would eventually finish off in the mountains north of Ind where they would found the Kingdom of Bloodmar. Inside the Kingdom of Bloodmar the freedom of being away from his father allowed Hodir to silently change both himself, and the Visigoths with him into something different. After centuries of change they would eventually become the Magnataur bearing basically no resemblance to the Visigoths they had once been. He would plan to engage into war with the mighty Ind Empire and destroy that Kingdom handing it over to the forces of Chaos. As his army would prepare for this invasion he would be ambushed by his brother Gymer inside his fortress and his brother would kill him thus ending his hopes for destroying Ind. Following his death he has become the god of the Magnataur and his son Grom'Thar has become the image of his father and dreams of destroying Ind like his father wanted.

As with most stories the time of the Noble Titans would end when Tzeneech the God of Magic, and sorcery managed to destory his protective shield. This meant that he existed without any shield against greed, coruption, or hate. These feelings creeped into him until eventually he became the First of the Chaos Gods. It is purely ironic that the ability to destroy his protective shield was created when the fallen Old One Tek begin his experimentation on the Titans. Tek believed that the Titans created an inbalance in the world and the only way to make the world into its natural state was to make the Titans act naturally. In order to do this he used his unimagineable technology to enter the Fade which was the domain of Tzeneech and while in the Fade he spread a kind of virus into the Fade which seeped into Tzeneech and placed questions into the Titan's mind. The virus allowed Tzeneech to understand the emotions that were supposed to be inhibited by his shield, and with these emotions he was able to destroy the shield completely which then led to these emotions spreading.

Following the Eternity War the times of hiding the excistence of evil within the Titan's ranks was over, and in such a brief time the two sides met in the Fade and the Titans attempted to understand the purpose of this group. As they attempted to discuss the matters they came to quickly understand that Khorne, Nurgle and many others were now barely capable of containing their personal rage and because of this the two sides pulled apart and both sides prepared for the first blow. The first blow came when the violent Trolloc of Khorne attacked the Titan homeland of Olympas in a massive battle that caused the deaths of many Titans and several of the more bloodthirsty of the Chaos Gods. As the siege of Olympas went on the forces of the other main Chaos Gods found themselves free to do what they wanted as Khorne was basically on his own holding the Titans in place. Nurlge joined the siege and brought his large forces to bear against the fortress of Tarterus where he besieged the massive fortress and put a large amount of fear in the Titans that their rear would be vulerable due to the fall of Tarterus.

As the forces of Chaos had begun to plan for the Titan Civil War they had made the efforts of attempting to corupt the two sons of Zeus as they both had portals within their cities which allowed for the movement into Olympas from the undefended center of the city. In Odin they saw little hope of coruption so they moved onto Vendriel who was jelous of his brother, and hateful towards his father giving Slanaash ample room to work his way into the soul of Vendriel. Vendriel would fall to Slanaash and give himself over to the service of Slanaash, and in this way he begin changing Olympus changed from the old version to a Chaos version where demons walked freely amongst the city. On Earth the two sons of Zeus would learn of this event and Odin would travel to Olympus with many Valkyrie and his wife Freyja in order to talk to his brother in the belief that they would go to the Fade and help their father in the war. When he arrived he was shocked to see the changed in Olympus. It had been some time since he'd been there and the once gleaming white city was now stained purple and the old gaurds, and people had been replaced by demons and creatures of nightmares. Odin would enter the throne room of Vendriel and demand to know what had happened and his brother told him that he had heard the call of Slanaash and it told him of the true meaning of life, and that the goals of the Titans were no longer his goals. Vendriel begged his brother to assist him as he was going to assail the Fade from within the mighty city of Olympas. Odin refused and a battle broke out between the two which only ended when Odin and his Valkyrie, along with Freyja escaped the city and made their way back to Valhalla.

The Battle for Olympus

Odin would engage in a massive Battle on Earth against his brother during the Titan Civil War after his brother was turned to the service of Chaos and attempted to invaded the World Edge Mountains using his armies in Olympus. Vendriel would be forced due to his poor military skills to fight a two front war with his main army fighting the forces of the Dwarves and their Pantheon in the north, while his other forces were slowly pushed back inch by inch by the forces of Valhalla. Finally the forces attacking the Dwarves were defeated and as they retreated back to Olympus they were caught between the avenging Dwarves and the forces of Valhalla and the were massacred in their thousands. Following this disaster Slanaash sent one of his brightest luitenents to the battle in the form of Helester who took control of the forces of Vendriel and begin to lead a skilled defence of the mountains of Olympus. As the Titan Civil War ended in victory for Chaos the leadership caste that had been built by Helester returned to the Fade so that they could recieve reinforcements to reengage their attack on the Dwarves and Valhalla. While they left Vendriel made a play to recontrol Olympus through the creation of a group of Olympians called the Vanir. The Vanir would be utterly loyal to him, and when Helester returned with a massive army he once again moved north and put Vedriel in command of the defence of his rear which should have been easy with the huge forces he had at his disposal. Instead of doing this Vendriel silently engaged Valhalla in battle, and would be destroyed on the steps of Valhalla by Odin and his commanders. With Vendriel defeated the forces of Valhalla pushed south and sacked Olympus putting it under their control, and it was in this moment that Helester realized he had failed to destroy the Dwarves and turned his forces around and split the army into two with his side attacking Valhalla, and a smaller force attacking Olympus. Helester was much reduced and was defeated and killed by the forces of Valhalla while his army attacking Olympus was also destroyed meaning the end of the attackers. 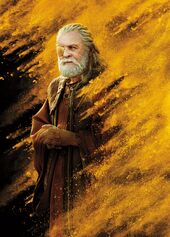 Odin - Father
Add a photo to this gallery

Retrieved from "https://lucerne.fandom.com/wiki/Hodir?oldid=37472"
Community content is available under CC-BY-SA unless otherwise noted.