Conrad Carolingion would be commanded to go to the Dutchy of Aerenia where he is commanded by his father to deal with a several diplomats sent by the Empire of Metrovingia, and during this time he brings his sister Emma and his two best friends in the Alcase noblemen Jared Orsinio and his lover of which the group meets with the Duke of Aerenia and finds out that the Aerenia Dutchy rejected offers of union with the Marolingions and following this the Marolingions traveled to the county of Auxerre where they were now conspiring. Travelling to the County of Auxerre it is Conrad that meets with the Marolingion diplomat and the count of Auxerre and during this meeting things appear to be going well but after the Marolingion diplomat makes a rude comment to Conrad's wife violence begins when Conrad murders the man out of anger leading to a bloodbath in the counts hall which ends with all the Marolingion party dead and the shocked count of Auxerre cowed into support.

Searching for a Traitor 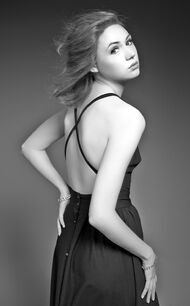 Emma Carolingion - Sister in Law
Add a photo to this gallery

Retrieved from "https://lucerne.fandom.com/wiki/Isabella_Dololingion?oldid=74299"
Community content is available under CC-BY-SA unless otherwise noted.