Start a Wiki
Malflovia is a "daughter" of Flemeth and thus a loyal servent of the Korcani Wilds.

Malflovia would be born a Magi with an extensive amount of control and power leading to her designation as a level four Magi. Malflovia has had for generations an eagle that she uses as her familiar and even as her power has increased and her need for the eagle has diminished she has continued to use the eagle as her only real companion.

She suffers from the same debilitating depression that accompanies many of the "daughters" of Flemeth. In her resistance to her mother Flemeth she was branded with the mark of Korcani during her turning and this has become something she is indescribably known for. She is especially uncomfortable in her position in the Kingdom of Arnor and she longs to either escape her prison in her mind, or to simply die. Her body is extremely pale following her rebirth, and this has caused her to grow fond of wearing hoods, and other clothes that conciel her true self.

Malfovia was born into the Germanic area of the Empire of Numeron, and during her youth her parents were members of the large but declining pro-Numenorian Teutons. Her family would become the target of racist attacks after the Shadow Man would install himself into the town and cause a massive bloodlust to erupt among the people of the town towards anything that might be supporting the Numenorians. After her death she was brought back by Fuh-Zhellia Theirin II. and then Flemeth would spend years upon years drilling into her mind her new existence, but the depression that all the daughters felt post their revival was extremely prevalent in Malflovia of whom found herself constantly attempting suicide but unable to follow through due to her curse. Eventually she would be sent to Arnor where she would be commanded to simply watch, and take part in any negative action against the Kingdom of Arnor if it was simple. She obviously tried her best to never do this, but her mind was against her on many occasions, and she became responsible for the Empire invasion of Arnor after she corrupted the Elector Count of Austria into becoming belligerent towards Arnor. Following this she remained in Austria waiting generations to once again cause chaos in the region, and her time would come with the birth of Priam Troy, of whom Flemeth would have her target for corruption. Malflovia would command her to to get into the head of Priam Troy of whom she would be commanded to convince to hate Arnor to the point that he would spend his life wanting to destroy it. Malflovia would be stuck watching as her corruption of Priam Troy led the kind, and gentle young man to become an exceptionally arrogant and vindictive man that had an almost unending aggression towards Arnor, and throughout this entire time she would make trips into Arnor and during one of these trips she met Chris Hemsworth of whom would be kind to her.

"Let me tell you one thing, and then let us speak of it no more. Love is a weakness. love is a cancer that grows inside and makes one do foolish things. Love is death. The love you dream of is something that would be more important to one than anything, even life. I know no such love."

Malflovia was born in the Empire city of Berlin during the dark days of the Downfall of the Numeron. As she became old enough to take part her family begin to teach her about their ways. As she came to learn she and her family were silent suporters of the Numeron and in this way they were met with a lot of hostility by the majority of Emperium citizens who were turning against the Empire of Numeron. It was during this time of relative peace that Flemeth would send the man of Shadow of whom would begin a process of sowing fear amongst the population of the Teutons around them. Where once the people were friendly, the work of the shadow man led sane men to turn bloodthirsty, and the honorable men that gaurded the town became obsessed with the numerous plots that he made up for them.

"On the surface sometimes the world is as calm as a river on a cool spring day. But under the water the tensions are rising. The water is preparing to bubble and its never pleasent when it does."

The family did there best to appear neutral but as time went on their fellow neigbors and former friends all began to turn on them. First her siblings were killed in a massacre at the childrens school, and then her parents were butchered in their shop. The people of the town were then roaming the streets looking for anyone they knew to be supporters of the Numerons. She hid for many weeks but eventually she was discovered and brought to the center of town. It was here that they would tie her to a pole, and light her on fire. As she died she was protected and watched by the "daughter" of Flemeth Aestasia

Her changing was especially painful as her body had to regrow all the burned skin in order for her transformation to continue. 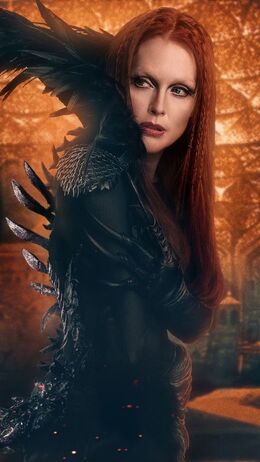 Flemeth - Adopted Mother
Add a photo to this gallery 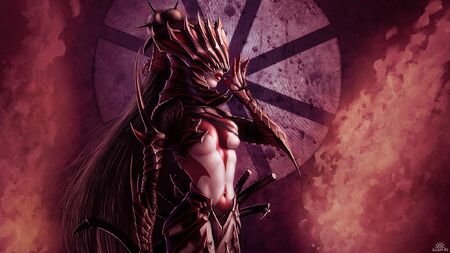 Flemeth - Master
Add a photo to this gallery

Retrieved from "https://lucerne.fandom.com/wiki/Malflovia?oldid=76465"
Community content is available under CC-BY-SA unless otherwise noted.