Start a Wiki
Mellia Aubern is the daughter of Brandon, and Lolia Aubern making her a member of House Aubern. Mellia Aubern would come to marry the bastard sworn sword of her family in the form of Robin Cross of whom she had loved for many years and who had always protected her.

Mellia Aubern was born the second child of her father the heir to House Aubern and when she was young she was very close to her grandfather of whom spoiled her with much love and adoration.

Mellia Aubern was born the second child of her father the heir to House Aubern and when she was young she was very close to her grandfather of whom spoiled her with much love and adoration.

"I had a newfound belief in the world, and when he betrayed me that was why I was so hurt. Don't you understand William that I would have obeyed you if you hadn't turned your back to me. Execute me, but know that your the one who is guilty."

Charles despite this new found loyalty found himself discusted by the fact that Draco Highmore remained at such high levels of the goverment and lobbied with William for his trial for the death of Joey when finally he was commanded to think no more of this. Believing this a betrayal by William he would curse his name and promise to end the life of the entire Highmore family. Desmond, Charles, and Penelope Faraday would become tired of their failure and would hatch another plot following the departure of much of House Lovie for Lorderon where in they would kill the entire House Highmore and make it appear to be the work of Freddie Highmore.

"I had to do what was right, even if that meant betraying my Lord."

As their plan reached conclusion they would be betrayed by Mellia Aubern of whom told Emmett McCarty of the plot and immediatly afterwards they were taken into custody by House Lovie of whom held them prisoner for nearly three months waiting the return of William Lovie. While they were in prison Desmond Faraday of whom had escaped the capture of the rest of his family would sneak inside the home of the Highmores and attempt to kill Freddie. As he prepared to kill him he was startled from behind by Emma Bell of whom struck him with a plate and allowing Freddie to get his sword. The two would fight breifly with Freddie overpowering him quite easily. Preparing to call the gaurds to take Desmond alive he was shocked when Desmond got up and lunged at Emma taking her into his hands and threatening to break her neck. Fighting Desmond off her Desmond fell to the ground and Freddie would slash hima cross the neck with his sword thus ending the sad life of Desmond Faraday.

"Charles could have stopped his son but instead he pushed him forward. He deserved to die, and I didn't want to live without Desmond."

Learning of the death of Desmond Penelope was devestated and knew that when William arrived she wanted to die. When he returned they admitted their guilt and Penelope was shocked when it appeared that instead of death William had been convinsed to exile them from Lucerne. Realizing that Charles living was more then she could accept and not wanting to live alone without Desmond Penelope said that they would never stop trying to kill Freddie and House Highmore and it was cruel to leave them alive with such pain in their heart. The two would be executed by hanging and their bodies burned and released into the clouds off Lucerne through the great Lucernian Shoot. 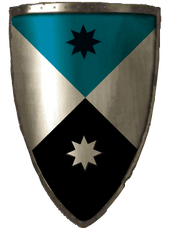 Robin Cross - Husband
Add a photo to this gallery

Retrieved from "https://lucerne.fandom.com/wiki/Mellia_Aubern?oldid=29373"
Community content is available under CC-BY-SA unless otherwise noted.