Nurgle is a First Generation Titan of whom was once a Noble Titan created by the Old Ones in order to control the diseases of the world, but he fell to Chaos and is now one of the six Prime Chaos Gods. He is titled the Great Lord of Decay and represents pestilence, disease, and physical corruption. Of the five Chaos Gods he is said to be the most attentive and involved with the plight of mortals. Nurgle has one sibling in the form of Ares of whom he was extremely close with but the two became mortal enemies following the fall of Nurgle.

Nurgle would be created by the Old Ones during the First Generation of the Titans and was created as the brother of Ares and was created in order to be the controller of diseases and their like on the planet and during this early time of his creation he would work closely with his Old One creator in the form of Affinity of Clarity and Purity of whom Nurgle came to see as a father of sorts. Nurgle would be devastated at the departure of the Old Ones and despite Affinity of Clarity and Purity attempting to make him understand why he had to leave it was Nurgle that ignored the reasoning and harbored a feeling he could not understand due to his Titan shielding in the way of resentment.

Nurgle created the Asura and cared for them extremely deeply, but when he was corrupted he would have two of his children craft a disease which destroyed his memory of the Asura, but in spite of this he is remembered fondly by the surviving Asuran. Nurgle during his non-corrupted life took the form of an Asura but after his corruption his creation of diseases and plagues eventually effected even his own form as he now appears more like a bloated creature resembling little of his Asuran form.

Nurgle is also known by the names Neiglen, Onogal and Nurglitch, derived from his Dark Tongue name of Nurgleth. Human Chaos Marauders call him Lord of Flies or the Plague Crow.

The Asurans are known as one of the Elder Races and were created by Nurgle one of the Major members of the Titans. Nugle formed them in the mountainous area of western France, and they dominated this area and grew to become the most technologically advanced of the early Elder Races.

Nurgle would during this time begun to feel a sort of secretive feeling towards his Asurans and thus found himself constructing for the Asurans a massive secret fortress in the form of Rata Pten of which all knowledge he would keep from his siblings and under the leadership of the Asurans themselves the construction would give them a home not known by any of the Titans including eventually himself. Following the end of the construction he would begin to be whispered to by the Chaos corrupted Tzeneech and with the fear of destroying his own creation he would have his Asuran councillers use Magi on him that made his memory of the fortress completely disappear. With his knowledge of the fortress gone he would spend years constructing another series of smaller weaker cities for a new group of Asurans to inhabit of which he spoke of often as it was all he remembered, and it would be in this smaller group that would eventually face the wrath of the Chaos Gods.

The forces of Chaos miscalculated how powerful the mortals had become, and in a brazen act of defiance the servents of the Old Ones managed to push back Chaos. With their armies defeated the Noble Titans swooped in during the infighting amongst Chaos and began putting into place defences as best they could in order to assist the mortals.

Following the Eternity war the Trolloc's would be targeted by the Chaos Gods Malekor, and Nurgle who released the Trolloc Plague which caused immense deaths among the Trolloc but most critical was the affects the plague had on the biology of the Trolloc changing them from a creative fee thinking race to a race cut off off from the fade and more beast then intellectual.

Nurgle distributed his gifts of pestilence and decay generous. His Champions , ravaged by disease, are protected against such pests, because they get used to the pain and discomfort, and while her body rot, receive the spirit of Nurgle they live, where unworthy mortals would have long since rotted away. So can Champion of Nurgle endure wounds and pains that others would to its knees, and still continue to fight in his name. They are more terrible than all the other Champions of Chaos to see, because her rotten flesh peeling from their bones, their intestines are bloated with body gases and their stench of decay is a constant reminder of the fate that awaits all living creatures, while its leprous skin more leathery is.

Valnir, the butcher - presumably Valnir Æsling - was once a chief of the barbarian tribe of crows , and Emperor of Chaos. He hates all living beings, and his body is eaten by maggots and is always accompanied by a cloud of black flies. He often sends before a so-called Slaughter blight on the enemy. Whether the Red disease, brain fever, or black rot attacks the enemy, however, entirely responsible for Father Nurgle. His God also gave him the ability to regenerate as a chaos gift.

He was one of the few marauders who built a veritable empire. While Asavar Kul Chaosinkursion he attacked with heavy losses Kraka Drak , the most famous military town of Norscazwerge and defeated not only all the armies at the gates, but also destroyed all the inhabitants. The fortress was later repopulated by Norscazwergen. His ruthless marauders from the north attacked again and again the kingdom of Kislev and the northern empire of. His name was at the time of Magnus all feared. Legends say that Valnir in his youth, after he had lost his family, of Nurgle has blessed. He was awarded the title of the butcher and the flail soul collectors . Later, when he was in a siege battle in Praag took part and then in a battle at the gates of Kislev of Tzar Alexis of Kislev was slain himself, hid his followers, the corpse of the dead and seated him on a primitive throne above deep on a towering altar The Chaos Wastes , where he rotted for decades before him. Two hundred years later than Nurgle, which had fallen the unremitting slaughter and destruction of his servant, he breathed new life and him his champion stood on the battlefield, the reverence of the Crow tribe was great when her corpse totem rose and old of his altar descended to a new death and destruction over the kingdoms of the people to bring. Since Valnir common than decaying, living corpse in a brutally stinking, rusty armor, armed with a contaminated Flegel 's death and pestilence in the name of his patron god. Where it appears to follow plagues and diseases, and wells dry up waters are unfit for human consumption. Rabid animals, people sick, weak and starving.

As opposed to the other Ruinous Powers of Chaos, many of Nurgle's followers do so by no choice of their own. The taint of Nurgle spreads readily among beast and humanoid alike, and the awful ailment known as Nurgle's Rot may strike even the strongest and cause him to be outcast as a leper. Despite the nature of his influence, Nurgle does take an interest in the victims of the diseases he unleashes (which he considers to be "gifts"), jovially caring for them in a manner similar to that of a loving grandfather; for this reason he is frequently referred to by his cultists as Grandfather Nurgle. This also causes some individuals that would have otherwise never been infected to seek out infectious disease or even poison themselves to earn his favor.

As the Chaos God of disease and decay, Nurgle's followers are often equally interested in the spread of disease. His followers become infected with horrific diseases which cause them to appear bloated and rotting, or wizened, sickly and pale. His Champions often become so mutated and putrid that they are impervious to pain and almost impossible to injure.

While equally as powerful as Khorne or Tzeentch when his plagues are at their peak, perhaps even more so, Nurgle's strength tends to wax and wane much more than that of the other Ruinous Powers, leaving him with little or no army one day and unstoppable hordes of rotting followers the next.

Nurgle and his daemons, in contrast to their morbid and putrid appearance, are jovial and friendly in demeanor. Nurgle is often referred to as Grandfather Nurgle, Father Nurgle or Papa Nurgle by his followers because of his paternal nature.

The diseases of Nurgle lend themselves well to the creation of chaos demons, and his host is by no means insignificant. 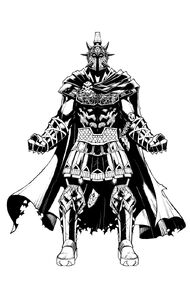 Ares - Brother
Add a photo to this gallery
Retrieved from "https://lucerne.fandom.com/wiki/Nurgle?oldid=77140"
Community content is available under CC-BY-SA unless otherwise noted.