Seri-Pellia Elena has a low level control of Magi putting her as a level two Magi and her Magi has taken the form of preminitions and visions, while she is unable to use Magi tools or cast nearly any spells.

Oropher would flee Dol Amroth following his final attempt to warn his father of the coming betrayal failed, and he took with him a large force swearing loyalty to Gondor, and travelling to the port of Rinlis where he shuttled prince Balian Imrahil out swearing personal loyalty to Balian and together the two went by boat to Gondor.

Grove of the White Witch

"She killed them all. That fact alone was more horrifying then I've ever let on but that wasn't even what made my time their so unimagineable to me. It was the pace that she did the killings. Some survived for weeks of her torchere. Some had little left of them by the end as she used her Magi to keep them alive when it was clear to me they should have been given their escape. I wanted her dead every moment of it, and each time I saw her I thought of new and more painful ways to end her life. Thats the worst part of the whole thing. I dreamed of my vengeance against her in so many more ways then how it ended. She deserved far worse then the spear in the back she got. She deserved far worse."

When he fled Dol Amroth with his siblings he would arrive in Gondor and find very little of the love he felt for Dol Amroth in this new and bleak land. This lack of affection caused him to travel the lands of the north where he would find a grove west of Cair Andros of which he was warned by many locals was haunted by an evil witch. For a time he felt a fear to not enter the grove so he went to the local villages and assisted them with whatever tasks they needed, but eventually he came to see that the main thing they needed was to stop being harassed by whatever threat lay in the grove. This would lead him to enter the grove with a small group in the belief that he could end the threat to the villages. Believing himself above any witch he entered the grove, and was entranced and taken prisoner by the White Witch Jadis of whome is a "Daughter" of Flemeth. Jadis forced him to watch as over the course of several weeks she torchered and killed the five men that had accompanied him into the forest. These were the first deaths he had ever seen and despite his best attempts to control himself he found himself crying each night for rescue and relief.

"I had lost touch with my brother and it took one letter for me to realize that. I had to save my brother because I knew he was a good person who deserved better then to die alone in some forest."

After a week of being gone, the villagers sent word to the capital that Peter Imrahil had entered the grove and hadn't returned in a week. This news would reach Balian Imrahil of whom was with his sister's in their small town of Belfian of which they had been growing for the years that Peter had been wandering the forests. Balian immediatly left the town in charge of his commanders and went with a party of his best knights to the grove. Balian had ordered his sisters to not accompany him but they had disregarded this and instead had followed behind him silently. When Balian reached the edge of the grove he was advised by his top advisor Edrahil Nimothan that these lands were cursed and they would not survive entering the forest. When Balian told him he was honor bound to attempt to save his brother Edrahil said he knew that he just wanted him to know they would most likely die.

Fight in the Grove

"They came at us in an endless horde but we stood side by side, and fought our way through. Every step I took was one step closer in my mind to saving my brother."

Balian's approach into the grove was not a secret to Jadis as she could sence the noblity of him and his men entering the grove, and when she saw this she went to her mirror and saw the future of this event and was horrified to realize that he was going to kill her. Realizing this she summoned her forces to her, and thus she sent against him her dark servents in the hopes of killing him before he killed her. Balian would battle through these darks creatures alongside his knights and their combined strength was such that the creatures had no hope against them. As they moved closer and closer to the center of the Grove Balian's sisters were moving in from the other direction and entered the grove first. The two girls wouldn't see anyone nearbye as Jadis had left in order to confront Balian and his knights. The girls would untie Peter from his constraints and hug him but he quickly broke away and grabbed a giant spear from the ground and ran towards the direction that she had left in. As this was happenining Balian and his knights were reaching the grove when Edrahil was struck by a blast from a Giant white light in front of them. Before

Balian and his knights eyes Edrahil was encased in ice, and before they could barely move against her she struck the other five knights and knocked Balian to the ground. Balian deflected shot after shot from her but each shot knocked him back and weakened his ability to shield himself. As he was about to give in the shots ended and he looked at her to see his brother Peter had stabbed her through the chest with the spear. With her death Edrahil, and the knights were released from their ice encasement and Peter, Susan, and Lucy helped them all to their feet. Surveying the mess around them they realized how many of her creatures they had killed when they had trouble moving past their bodies.

Before leaving Peter would make sure that the center of the grove, and Jadis were burned in a giant pire. After this the group would bury the remains of the five men that had accompanied them, and just as they prepared to leave Peter would fall to his knees and cry. The rest of the group didn't know what to do, but Susan would walk up to him and hold him close, and when this didn't calm him Lucy followed suit followed by Balian. With this the group finally prepared to leave the grove and return to Belfian. As the group made their way back to Belfian they all attempted to make Peter feel better, but he was locked in a depression after seeing those men die so brutally and they reached the town weeks later with little gained in his emotional state. 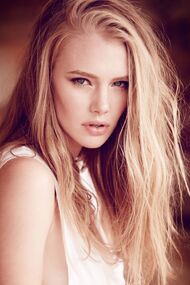 Slu-Caria Elena - Niece
Add a photo to this gallery

Retrieved from "https://lucerne.fandom.com/wiki/Seri-Pellia_Elena?oldid=78722"
Community content is available under CC-BY-SA unless otherwise noted.