Slaanesh, the Dark Prince, is a first generation Titan of whom once stood as the God of Pleasure but now stands as the Chaos God of Pleasure, Passion, and Decadence. Within the Realm of Chaos his domain is that of all mortal sin, especially those of the flesh. Lust, pride and self-indulgence are the hallmarks of all that follow him. He is commonly known in the Empire of Man as the Prince of Pleasure and even the Prince of Chaos. He is the youngest of the Chaos Gods. Slaanesh is the beguiling water, the Great Serpent who lives for pleasure and the experience of the sensations of life and death. All those who live in the pursuit of pleasure risk falling under this god's deceptive charms.

Slanaash was one of the first Titans created, and was created by the Old One Tranquily of Living World of whom created him and his siblings Cenarius, and Elune to fill more of the expanding ranks of the Titans with Slanaash originally created to become the God of Pleasure. As he grew in to his role one of his earliest works was the creation of the Elves of whom would come to dominate the continent of Ulthuan which he birthed from the ocean with the help of his fellow Titans. His creation would become very important to him, and he would split their worship between him and his beloved Artemis, but this would end when during the Titan Civil War he was corrupted. So strong was his love for the Elves at the time that unlike most of the other Chaos gods he did not use the Elves as his army and instead used demons thus making him significantly weaker but keeping the Elves strong. Following the corruption of Slanaash he hosted an event known as the Dance of Lirith where having already corrupted his grand daughter Lirith he would have her do a dance where she told the story that allowed the shield over the titans to be broken and with this event all those who were present were corrupted including half the Asurian pantheon.

The Creation of the Elves

“He loved the Elves when we were young. To have seen him with the people he had birthed, was to witness love in it's most pure form. He spent years on making sure every inch of Ulthuan was perfect for his people...and to see this. His fall was all the more painful because I know now he cares for nothing anymore. The love he knew is gone...Its just gone.”
— Artemis

Slanaash was one of the first Titans created, and among his earliest works was the creation of the Elves of whom would come to dominate the continent of Ulthuan which he birthed from the ocean with the help of his fellow Titans. In order to bring these Elves to Ulthuan he fashioned seventeen pairs of males and females forming the seventeen Elder Houses of whom would begin to populate the island of Ulthuan. Wanting to expand them quicker Slanaash would create hundreds of more pairs of whom came to Ulthuan and became known as the Great Houses of Ulthuan, and thus allowed the population to expand even quicker. During this time Slanaash walked Ulthuan constantly as he was obsessively in love with the Elves alongside his beloved Artemis of whom became the almost mother of the Elves, and during this early time Slanaash and Artemis would form the early foundations of the Elven Pantheon based around Slanaash's persona as Asuryan.

The forces of Chaos miscalculated how powerful the mortals had become, and in a brazen act of defiance the servents of the Old Ones managed to push back Chaos. With their armies defeated the Noble Titans swooped in during the infighting amongst Chaos and began putting into place defences as best they could in order to assist the mortals.

N'Kari would take part in the killing of Yen Fang where she joined with her father in Slanaash in working alongside Malekor in destroying the first of the Man Gods.

While generally referred to as a "he" by humans, Slaanesh is actually neither gender, combining characteristics of both and perfecting them. Slaanesh typically appears in an androgynous form in which it is a woman on the right side and a man on the left with two sets of devilish horns growing from its head. Slaanesh can assume any form; male, female, hermaphrodite or asexual, but it prefers male bodies. Its sacred number is six and the colours associated with Slaanesh are purple, pink and black. The name Slaanesh is a corruption of the Elven term Slaaneth (Slaa meaning "ecstasy" or "pleasure" and Neth meaning "lord" or "prince"; hence, the Prince of Pleasure). While Khorne is a frightful and terrible warrior, Tzeentch's magic forces his form to defy mortal logic, Malekor the master of plotting and decepetion, and Nurgle is the ultimate embodiment of his own decaying creations, Slaanesh alone is divinely beautiful. In physical form, Slaanesh is perfection. A long-limbed, elegant, androgynous figure with a haunting, almost frightening beauty. Slaanesh's appearance depends more on the observer than the observed, changing eagerly to please and seduce the eye of the beholder. Rumor amongst Slaaneshi cultists has it that to look upon Slaanesh is to forfeit your very soul to his every whim.

Seductive in the way that only an immortal being can be, Slaanesh is the Chaos God of pleasure, passion, luxury, art and indulgence. He is the manifestation of all hidden vices, cruel passions, and secret temptations that men hide fearfully in their hearts. This abject lack of restraint, and pursuit of pleasures, lures many mortals to his side, often gathering in places of carnal pleasure to pay homage and praise to their depraved Lord. A notable Slaaneshi cult in the Warhammer World is the Elven Cult of Pleasure which partly caused the Sundering of Ulthuan and the birth of the Dark Elven culture, and it is still popular among the people of Naggaroth today. In Warhammer Online: Age of Reckoning, a prominent cultist of Slaanesh is Lady Anhilda Kreuger in Talabecland. Slaanesh's followers seek pleasure in every experience, and quickly become inured to more mundane things, including sounds and colours; thus they frequently wear garish, brightly coloured armour, or clothing which is extravagantly decorated. Worshippers of Slaanesh are known for their complete lack of fear, as they see losing a battle as a new experience to be enjoyed. While not interested in the dirty warfare of Khorne's narrow-minded berserkers, Slaanesh does enjoy combat of the artistic sort, taking pleasure in watching extremely talented gladiator battles, where the act of fighting is transformed from a means to an end into an art form all its own. Slaanesh bestows his favour upon any who act on an interest for an art, whether the art is that of combat, of painting, of poetry or of passion. The favour of Slaanesh will aid the artist in creating, amplifying everything created to immeasurable levels, while at the same time corrupting them indescribably, such that any mortals who look on them are at once both entranced and terrified.

Being the youngest of the Chaos Lords, the host of Slaanesh still pales in comparison to those of the others. But the numbers of Slaaneshi daemons grow with every passing moment and they are not to be taken lightly.

Daemonettes are feminine-looking creatures whose seductive bodies are a frightening contrast with their grotesque claws. They are lightning quick, and fearful foes in hand-to-hand combat.

Steeds of Slaanesh are bipedal smooth-skinned creatures with prehensile tongues, vaguely resembling seahorses. Their heads have long tubular snouts that contained their prehensile, poisonous tongue. These are the favored means of transportation for Slaanesh's chosen.

Fiend of Slaanesh is a bizarre daemon, a hybrid creature that combines reptilian, insectoid and anthropomorphic characteristics. It has a segmented body, a tail covered in fine scales and two pairs of humanoid legs that end in cloven hooves. Each Fiend also has a pair of claw-tipped and gangly arms that it commonly uses as front legs. A Fiend has not the necessary intelligence to apply these arms as grasping appendages, although it can employ them as weapons to deadly effect.

The Masque of Slaanesh, once the most favoured of the deamonettes, had an unfortunate case of misunderstanding with Slaanesh. It was in this very moment that her life was to change. She was cursed to forever dance unable to rest her weary limbs. 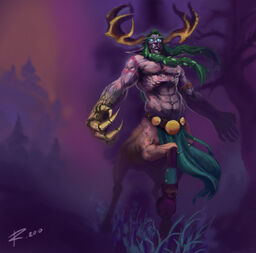 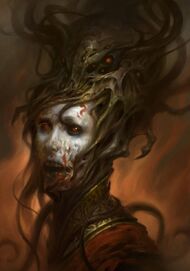 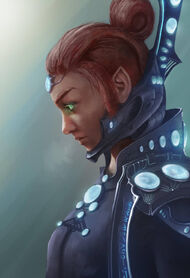 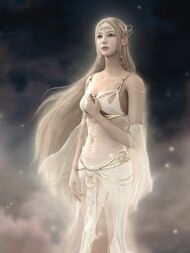 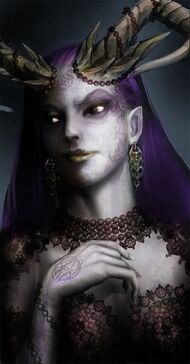 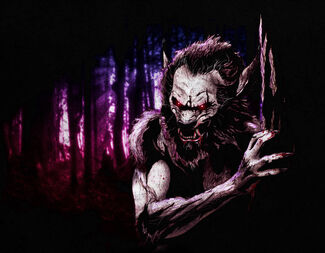 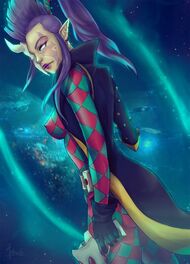 Lirith - Grand Daughter
Add a photo to this gallery

Cenarius - Family/Rival
Add a photo to this gallery
Retrieved from "https://lucerne.fandom.com/wiki/Slanaash?oldid=68908"
Community content is available under CC-BY-SA unless otherwise noted.