Start a Wiki
Stannis Strong is the son of Deny, and Cassana Strong making him a member of House Strong of Harrenhall through his father and a member of House Estermont through his mother. Stannis has three siblings in the form of Renley, Katelyn and Robert Strong who he maintains close contact with due to their existence on the lords council of Harrenhall. His brother Renley was deemed a failure but he left the city and when he returned he appeared to have completely changed himself into someone talented and now the two are close, his brother Robert is the most popular and powerful man in Harrenhall and a brutal fighter, while his sister Katelyn was murdered along with much of her family during the Invasion of Harrenhall. Stannis is married to his long time wife Selsey Strong with whome he has one child with. The birth of his lone child was a painful birth and left his wife unable to give birth again, a fact that has caused a great amount of conflict between Selsey, and Stannis.

Stannis Strong was born the second son of Deny Strong and was born just a year following the birth of his older brother Robert Strong of whom during his youth he was not close with in any real emotional way. During his youth he would be sent to the Riverlands where during his time there squiring in Riverrun he would be betrothed to a noble lady back in Harenhall but would more importantly convert to the religion of R'hllor and gain several companions in the form of Vesendria, and Shelensia of whom were priestesses of R'hllor and came to be his slaves following a victory in a tournament. When the Invasion of Harrenhall came to pass there was a group of soldiers from House Seaworth that were meant to assasinate Stannis so that he couldn't take part in the campaign, but these soldiers were killed before they could kill Stannis. Following the assasination attempt Stannis would lead the House Strong forces and as he led them he would devise the defences of the Market, and several other areas. He took personal leadership over the Market Gate and would put many of his best commanders in this area, and he would personally defend the Opera House which was the largest opening in the Market Gate. His defence of the opera house would lead to the deaths of hundreds of his enemies in a series of massacres, as they were without any sort of siege machine and were cut down as the attempted to cross the streets. Following the initial invasion he has come to lead the forces of House Stong in their campaign to take back the docks, and despite the massive numerical superiority of the Seaworth, Greyjoy forces he has succeded in pushing them back several blocks.

Stannis has gained a reputation far and away worse then his slightly younger brother Robert. Where Robert is decorated as a hero of the war with Dole, Stannis is remembered for the terrible brutatility that he used in order to achieve his victories. Where a village needed getting by most generals simply raided through but Stannis left nothing alive in the areas he passed through. Where captives were normally taken, Stannis left whole armies with their heads on pikes. These acts of brutality eventually led to his command being reigned back, and he was only reinvolved when the Dolish started to turn the tide of war following his absence. Despite this fact everyone around him understands that he was an instrumental part of the Dolish campaign.

Vesendria would join the older Priestess of R'hllor in Shelensia in becoming the Priestess of Stannis Strong as a wedding gift from the Riverrun R'hllor Temple, and this would be a blessed moment for the two of them as this was the calling they had spent their entire life preparing for.

"The limitation of riots, moral questions aside, is that they cannot win and their participants know it. Hence, rioting is not revolutionary but reactionary because it invites defeat. It involves an emotional catharsis, but it must be followed by a sense of futility." 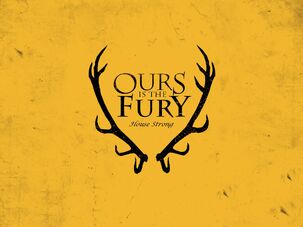 Selyse Strong - Wife
Add a photo to this gallery

“No act done in the service of the Lord of Light can ever be a sin.”
— Selyse Strong

Retrieved from "https://lucerne.fandom.com/wiki/Stannis_Strong?oldid=69907"
Community content is available under CC-BY-SA unless otherwise noted.