Taflarion Stormrage is the son of Malfurion Stormrage and Tyrande Whisperwood. He has two sibling in Shandis, and Helion Stormrage of whome Shandis is a legendary Sentinel within High Forest who has a reputation far larger then her age would imply, and his sister Helion is a sentinel as well but far less known then her sister Shandis. He is married to Helian Stormrage, and the two have a young child together.

Taflarion Stormrage is a level four Magi of whom is a member of the Nature School of Magi marking himself as a Druid. Taflarion Stormrage is also a Druid Chief, and a master at the Druid of the Talon Sect. This sect of the Druids is mainly responsible for the overall scouting and long range damage that High Forest launches. He was the first of the Talon Sect, and this was a moment of great proudness for his father Malfurion as it was the moment that solitified his son would be able to take the mantle of Druid leadership from him one day.

Taflarion Stormrage was born on Ulthuan, and he grew up with his father and him being very close to eachother. He was sent by his father during the War of Vengeance to France to attempt to find a place to found the new home of the Sindar Elves. When he was in France he found several forests but each one didn't seem to strike a cord that would imply they could all move their. He eventually met with Alleria Windrunner who told him about Athel Loren, but when he saw the forest he didn't think it was a proper place, and when he was about to give up hope when Vareesa Windrunner took him to High Forest and he saw the place they would move to. Tonlia Stormrage would be born shortly before the Sindari Elven departure from Ulthuan and was taken as a young child by her mother and father as they Sindari people left Ulthuan for what they believed was their new home in central Europe. Being a member of the Talon Sect is the position that he spends the most time with, and he often says that he spends more time as a Talon then he does as an Elf so he forgets the customs of his own people.

Tonlia Stormrage would be born shortly before the Sindari Elven departure from Ulthuan and was taken as a young child by her mother and father as they Sindari people left Ulthuan for what they believed was their new home in central Europe.

Taflarion was there with his father when the delegation of Lothlorian Elves arrived in High Forest to ask for assistence against the forces of the Orcs attacking the French region. While Malfurion was unable to assist he did send his son, along with the entire Talon Sect to assist, and their assistence proved vital to the Battle of Marsielles where there vision saw the encroaching army and allowed the defenders to ambush them at every turn.

War of the Forest 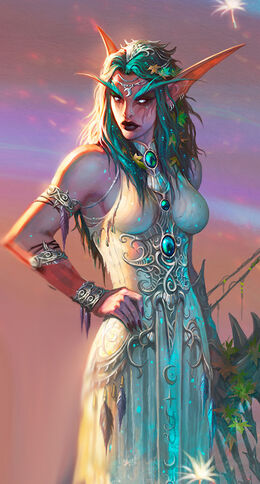 Tyrande Whisperwood - Mother
Add a photo to this gallery 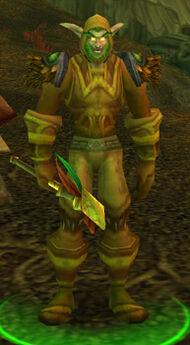 Retrieved from "https://lucerne.fandom.com/wiki/Taflarion_Stormrage?oldid=75035"
Community content is available under CC-BY-SA unless otherwise noted.