The Great Migration was a part of European History stemming from the Invasion of massive numbers of Chaotic servents who pushed the native Germans into Central Europe and Croatia. The Great Migration would dramatically change the demographics of the entire continent and lead to a continent dominated by the Germans.

The Great Migration would first begin to spark itself when the forces of the Chaos Gods expanded into the Andals, and the Rus through the coruption of their leadership. The Rus would overwhelm the few realms of the Ostrogoths and push nearly every Ostrogoth out except for the people of Kizlev who remained in their Icy Kingdom due to the intervention of the Teutons. The Andal Invasion of Norway, and Swedan would destroy the massive hold that the Goths, and the Vandals had over the region in a matter of only a few years. These dispaces Germans would move inwards towards the lands of The Empire where they discovered the land often blocked to them and this forced the Visigoths, Ostrogoths, Sueves, and the Alans to move around the Empire and into the lands of the independants in Europe.

Outline of the Migration 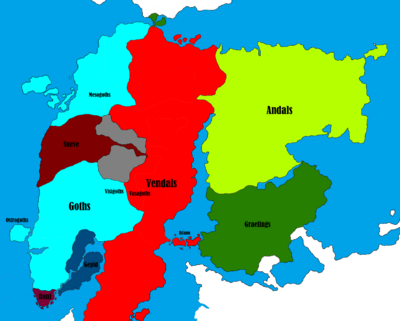 Ethnic Breakdown Prior to Invasions 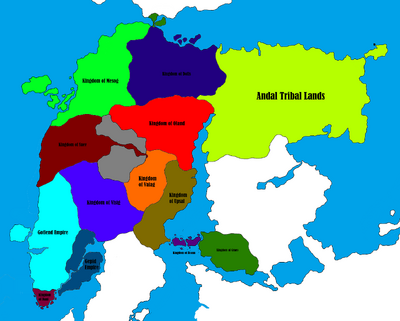 The Great Migration would first begin to spark itself when the forces of the Chaos Gods expanded into the Andals, and the Rus through the coruption of their leadership.

The Fall of the Andals

Jannok's position would be silent and forgotten by everyone except for Flemeth of whom after being commanded by Malekor to convert the Andals would travel to the lands of Jannok's family and begin whispering in her ear. Flemeth would infiltrate the royal family of Jannok with simple menipulation and became the lady in waiting of Jannok as she took on the form of a young girl to everyone, but for Jannok she appeared as the perfect mother of which was the one thing Jannok dreamed of most of all.

Jannok was not difficult for Flemeth to convert to her side as her entire life she had been ignored so Flemeth only had to show her the attention she had never gotten, and after only a few years at the side of Jannok she had turned the once gentle and kind Jannok into a menipulative girl who amassed allies like they were toys. As her menipulative skills improved she was poisoning the minds of several other chieftans even going as far as planning on having the child of a powerful Andal chieftan in order to get him to side with her. She did this without the pushing of Flemeth, and would consieve the child with the man and then was married to him in a quick ceremony in order to not embaress her family.

Her son was born, and from that point on she could no longer accept the touching of the chieftan and during the night Jannok had him murdered and using her powerbase placed her baby as the new chieftan with herself standing as his regent of sorts. Using this powerbase she finally had recieved the power she required to take control of the Andals but she would be pushed the final move forward by Flemeth of whom activated within her the small amount of Magi she had hidden away.

With a large power base and now control of Magi she would turn on her family massacring them in a bloodbath of a battle where she would become the Queen of the Andals and force the conversion of the Andals to the Chaos religion.

The Rise of Chaos

Jannok would at this point spend years corupting the entirety of the Andal people to the worship of Chaos, and as this continued her eldest child Dannok would become a demon prince as he was uplifted by Slanaash for his service to Chaos, and it was after this happened that Jannok begin to see what she had done and begin to slightly turn away.

After years of corrupting influence Flemeth was able to have Ivana kill herself turning herself into a ``Daughter of Flemeth`` of which led to her returning to the court of Muskova where she would spark civil unrest among the population of which was already reeling from the fact that the forces of Chaos were infiltrating all across the lines.

Beggining of the Migration

Following the collapse of the Kingdom of Oland the Vandals were broken as a unified front agains the Andals leading to the Vandals becoming the first of the Germans of Scandenavia to have widespread migration southward, and thus the early nature of their migration allowed much of the Vandals to escape southward without resistence.

The Rus would overwhelm the few realms of the Ostrogoths and push nearly every Ostrogoth out except for the people of Kizlev who remained in their Icy Kingdom due to the intervention of the Teutons. The Andal Invasion of Norway, and Swedan would destroy the massive hold that the Goths, and the Vandals had over the region in a matter of only a few years. These dispaces Germans would move inwards towards the lands of The Empire where they discovered the land often blocked to them and this forced the Visigoths, Ostrogoths, Sueves, and the Alans to move around the Empire and into the lands of the independants in Europe.

The Coup of Gotland

Flemeth would come north to Gotland as the armies of the Andals prepared to attack Norway, and Swedan and while other Chaotic elements dealth with Swedan she would infiltrate the Gotland royal family where she would discover the King of Gotland was beyond obsessed with his only child Morhlese of which she would use to her advantage when she begin whispering to Morhlese of a better life.

When the Andals attacked Swedan and the northern Kingdoms of Norway the Gotland king would prepare his armies to assist, but as he was about to leave Flemeth enacted her plan having Morhlese kill the Gotland King and then taking control of the Gotland Court where she would become its Queen.

Following her violent crusade in taking control of the island of Gotlend she would make arrangements with the Gepid King of southern Norway in an attempt to stop the expansion of the Gothic Queen Morhlese, and as these preperations moved into actions she would be met while marching north with her army by Flemeth of whom was able to corupt her and lead to the disasterous Battle of Meraker where she turned her Ostrogothic Army against the Gepids joining the Goths in destroying the Gepid army leaving Norway in the hands of the Gothic forces of Morhlese.

Following this she would met by Odin of whom was able to remove much of her coruption which led to her releasing her army to her her young daughter of whom she commanded to fortify Gotlend and never allow Chaos onto the island, and following this she would follow the commands of Odin in travelling to the Korcani Wilds and taking on the role of loyal Daughter of Flemeth.

Peak of the Migration

“They talk about the disorganization of the Great Migration, but what I remember was the peace of it. My father led Denmark in assisting the Vandals in moving south, and for years the retreat went without question. Only my failure changed it to Chaos.”
— Isabel Glusburg

As the non-Chaos aligned Germans begin fleeing Norway, and Swedan the main route of their escape outside of those who could find boats was through Denmark where the Imperium of Germania put in place a directive that the province of Denmark was to assist in their retreat and assist in them moving south where the goal was to overwhelm Central Europe with large amounts of Germans. This flow of Germans southward would continue for some time unopposed as thousands upon thousands of Germans escaped the Chaos Proselytism and made their way through Denmark, but the flow would grind to a halt when Flemeth entered the region of Denmark and targeted House Glusburg the most powerful of the merchant families of Copenhagen for corruption. Entering Copenhagen Flemeth would find little moral problems with the family especially its lord in the form of Alf Glusburg of whom was a fanatic when it came to resisting Chaos and was closely supported by several Sigmar Priests of whom kept Flemeth from ever really being able to get close to Alf. Unable to corupt the leadership of House Glusburg she prepared to move on when the return of Isabel Glusburg, and her brother Theis Glusburg led to Flemeth taking another road when she was able to get close to the two siblings. Playing on their weakenesses she would fully corrupt both of them leading to their secret "'suicides" of which following this Isabel became a "Daughter of Flemeth" while Theis became one of the Dark Men.

“I didn't know what she was. I made a mistake, and now look at the price we have all paid for my mistakes.”
— Isabel Glusburg

Using Theis, and Isabel Flemeth was able to have them murder their father and without his presence she was able to have her agents commit attrocities throughout Copenhagen specifically targeting the Church of Sigmar of whom were devestated by these attacks. Now in control of Copenhagen Flemeth would begin charging massive fees to the Vandals to slow their progress, and when this didn't fully work she had Isabel deploy the forces of her family into south-western Swedan where they pushed back the retreating Germans. This was against the commands of the Emperor of whom at the time was Mandred Gausser and was much the same as Alf Glusburg in that he was a fanatical believer in Sigmar and for this reason when Mandred discovered what was happening in Denmark he hosted a Great Blot of the Imperium of Germania and despite agents of Flemeth going to the Blot they were unable to stop Mandred of whom instigated the Denmark Civil War. Leading a massive army of Sigmar fanatics and the state forces of Bavaria, Hannover, Prussia, and the Lowlands he would invade Denmark gaining the support of most of the population and putting Copenhagen under siege. Flemeth would flee the city with Isabel, but left Theis behind of whom tried defending the city but at this time the work of Godrik, and his children could not be resisted and they were able to rally the remaining Priests of Sigmar to their side, and confronted Theis in the Palace of Copenhagen where a large fight broke out. Theis fought valiently but was overwhelmed by the Vampire/Sigmar force and killed during the fighting, and as he was killed by Sigmar Priests this would be his permenent death.

Dowenshire would be invaded by the Vandals during the Great Migration and while wave after waves of Vandals flooded through the majority left Dowenshire but a several thousand remained and sacked the capital of Dowenshire re-naming it Vowenshire and instigating the true start of the war known as the Vandal Invasion of Dowenshire.

The Frisii would be forced to migrate from their lands in eastern Croatia westward where they would come to migrate into the Plains of Vetera where they maintain a sizeable minority across the lands.

Retrieved from "https://lucerne.fandom.com/wiki/The_Great_Migration?oldid=65147"
Community content is available under CC-BY-SA unless otherwise noted.