Vareesa Windrunner is the daughter of Laedren, and Hydriel Windrunner making her a member of the Windrunner family. She has three siblings in the form of Alleria, Legolas, and Sylvanus Windrunner of which Alleria leads the Kingdom of Quel'Thalas military, her brother Legolas joined Alleria in Quel'Thalas but is often in Gondor or High Forest assisting either Vareesa or Aragorn Elessar, and her final sister Sylvanus is a near Dark Elf under the service of the Kingdom of Lothlorian and married to the brother of the King of the Lothlorians. She maintains contact with Alleria but her relationship with her sister Sylvanus is strained. She is married to Haldir Minheer of whome she has two children with in the form of Halline Windrunner, and Jaeli Minheer.

Vareesa was born a member of the powerful Windrunner family, and she would be very close with all of her siblings during her youth. As they grew up they joined many of the Sindar Elves that joined the High Elves in going to France to fight the Dwarves in the War of Vengeance. Her role here would be less combat and more about scouting as before she left Malfurion Stormrage would make it known to her that they may leave Ulthuan and he needed her to find them a new home when she got there.Vareesa Windrunner left Ulthuan with the rest of her family but on the journey over she grew close to Haldir Minheer and through this relationship she made the tough decision to leave her family and follow Haldir to his destiny in High Forest where he felt the weakness of the Lothlorians would not exist. Since her arrival in High Forest she has gained an immense hatred for the Trolloc, and has become known as one of the most brutal Sindar commanders in High Forest for her lack of control in fighting the Trolloc.

Born as the youngest of the three Windrunner girls she was especially close to her sister Sylvanus and her brother Legolas Windrunner. Very Early in her life her family would travel with many other Elven families to the growing colonies in France.

“Why not have better dear sister. Why not find a place where we don't have to hide who we are. We are the original Elves, and if this island has moved on from us, then let us move past this island.”
— Alleria Windrunner

It was during the War of Vengeance that the lives of Vareesa, Alleria, Sylvanus, and Legolas Windrunner along with their entire family would change completely. The sisters would decide that they wanted to see the world and truly understand if there was a place for them outside of the shores of Ulthuan. Following this path they went along with Alleria Windrunner when the call of the Pheonix King went out for all Elves to assist the war effort in France against the aggressive and monsterous Dwarves, and in this way they travelled with their brother Legolas to France in the initial stage of the fighting. As the conflict continued the four siblings began to show a split in what they were interested in with Vareesa, Alleria, and Legolas following the teachings of Maflurion Stormrage and looking for a forest that teemed with the life that the world was made of, while the final sibling in Sylvanus would become enamored by Kael'Jarno Sunstrider of whom had travelled to France in secret with his siblings.

The reason for their travel their was that Laera Sunstrider only trusted his children with the mission that he required done. Laera wished for them to squire a series of magical items whose power would dramatically increase Laera's power amongst the Sindar Elves. While there they engaged in a conflict with Illidan Stormrage when they discovered Illidan was attempting to find the same items they were after. This conflict took them from item to item as the sunstrider children would capture one only to find Illidan had taken the next one. This continued until they reached Icecrown where they attempted to take a stone which there father said was the ultimate Magi regeneration tool in exsistence. They fought there way up the mountain through the minions of Illidan towards their goal and when they reached the top the three engaged in a duel with Illidan and were able to defeat him, and then escape with the stone.

This divide in which forests they all were visiting would have little importance during the war but when the Elves were forced to return to Ulthuan following the attack by the Dark Elves the three siblings found themselves separated for the first time on how to move forward. Vareesa was direhard in her devotion to the high Druid in Furion Stormrage, and because of this she wished to follow whatever command Furion told them to do. This was different then Sylvanus who had become involved in a minor off shoot of the SIndar Elves led by a prince named Laera Sunstrider and she wished to listen to his teachings about the forest. In the center of this debate were Alleria, and Legolas who simply wanted to be a part of the forest as they had always been.

Shortly after the founding of High Forest Haldir and Vareesa would be married in a small ceremony as the founding of the Kingdom was the main priority, but despite the hectic manner they would live the first years of their marriage they would be very happy together. 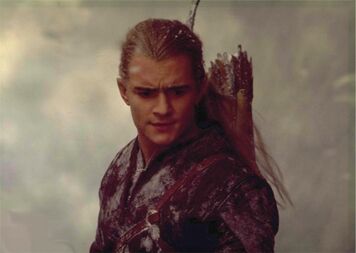 Legolas Windrunner - Brother
Add a photo to this gallery 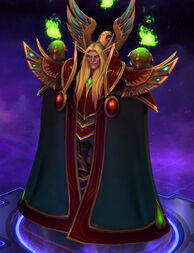 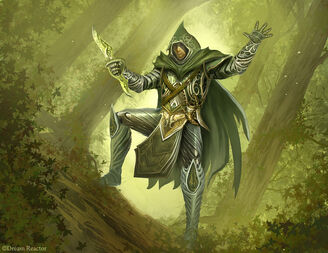 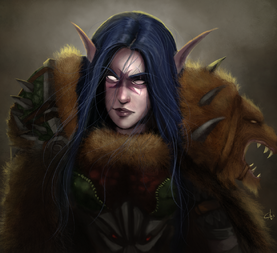 A'laria Sunriser - Friend
Add a photo to this gallery

Retrieved from "https://lucerne.fandom.com/wiki/Vareesa_Windrunner?oldid=76994"
Community content is available under CC-BY-SA unless otherwise noted.