Wyman Manderly is the son of Lamprey, and Tyrene Manderly making himself a member of and the current Lord and Patriarch of House Manderly alongside the High Duke of the White Knife. Wyman Manderly would come to marry Leona Woolfield of whom he loved truly and her death of sickness would leave him heartbroken, but even more devoted to fatherhood then he was before. With Leona Woolfield he has four children in the form of Wylis, Wynafryd, Wylla, and Wendel of which Wylis is the heir to House Manderly and a powerful knight of much influence of whom married into a powerful House of the Dright Islands connecting the two lands closer, while Wynafryd is a Magi of whom escaped the capture of White Knife by the Boltens fleeing to the Dright Islands, while Wylla is a lady in the court of White Knife where she has a lot of influence, while finally Wendel was forced to become a hostage at the Dreadfort where he would be killed during the Dreadfort Court Massacre.

Wyman Manderly would grow up the heir of House Manderly and thorughout his youth he was most known for his love to ride horses and he won some small acclaim in the lists when he was a young man, becoming a knight at the age of eighteen. Following the Invasion of Westbridge, the marriage of Miley Black into House Manderly and continued Lucernian expansion into Westros the Kingdom of Bolten would decide to intervene violently invading the White Knife only three months before the arrival of William Lovie III. of whom was going to formally annex the White Knife and the invasion was only one true battle as following the naval conflict the Boltens occupied the capital and the war ended in the defeat of the White Knife.

Wyman is so fat he can no longer ride a horse and must be carried in a litter, leading to the nickname Lord Too-Fat-to-Sit-a-Horse. He is nearly sixty years old, with a massive belly and fingers the size of sausages.

Wyman is amiable and has a loud, booming laugh. He is mocked by his own people as Lord Lamprey. By his own admission, and because of his physical appearance, Wyman is seen by many as craven and foolish, however, this is a clever front; he is shrewd, calculating and intelligent. He is also staunchly loyal to House Lovie and the Kingdom of Lucerne as he believes they are the best protection for his people.

Wyman Manderly would grow up the heir of House Manderly and thorughout his youth he was most known for his love to ride horses and he won some small acclaim in the lists when he was a young man, becoming a knight at the age of eighteen.

Fall of the White Knife

Lucernian Invasion of the White Knife 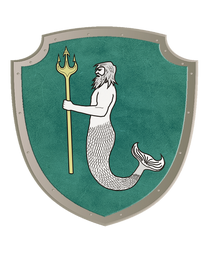 Tyrene Manderly - Mother
Add a photo to this gallery

Retrieved from "https://lucerne.fandom.com/wiki/Wyman_Manderly?oldid=74278"
Community content is available under CC-BY-SA unless otherwise noted.